The music of Richard Williams and his family suggests what country blues music in Florida might have sounded like in the early part of the 20th century. Born in 1887 in Jonesville (near Gainesville in Alachua County), Williams started out performing at local parties after learning to play guitar in the phosphate camps where he lived. His repertoire consisted largely of dance numbers known as "set pieces" but also included blues songs picked up from itinerant workers and popular songs from local jukeboxes.

In 1977 and 1978 Williams was recorded by the Florida Folklife Program for the North Florida Folklife Project. These recordings captured Williams in the twilight of his life before his death in 1981. While his technique and memory are not as strong as they would have been when he was in his prime nearly 60 years earlier, this collection provides a unique glimpse into a bygone era of black folk music.

These recordings of blues and gospel music by Williams and his family are available on the CD Tell the Truth, which was produced by the Florida Department of State through the State Archives of Florida and the Florida Folklife Program. 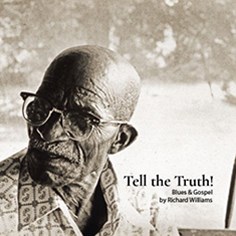 Listen to Tell the Truth! and download the tracks or request a CD from the State Archives of Florida.

Richard Williams was born in Jonesville in 1887. Folklorists Peggy Bulger and Dwight DeVane first visited the Williams family home in Jonesville in August of 1977 when they recorded "Begging Her to Come Home." This song – the earliest recording of Williams in the Folklife Collection – is unique for its rareness, as it does not appear in popular blues literature.