Florida's Got the Blues

History of the Blues in Florida

At the turn of the 20th century, travelers marveled at the African American music that filled the air of Florida’s towns, fields and waterways, but no one knows exactly when the blues began to be sung in this state. Rooted in African music traditions, forerunners of the blues were most likely sung by the first Africans to come to this land. Later, field hollers and work songs combined with harsh conditions and difficult lives provided the musical inspiration for the blues. The blues became the basis for other important musical genres and styles in America. Elements of the blues were combined with religious texts, which gave rise to gospel music. Musicians also combined blues chords and lyrics with elements of ragtime on different instruments to create jazz. Over the following decades, the blues would be given faster tempos and dance rhythms to become rhythm and blues, which was the precursor to rock and roll.

By the early 1900s, many of Florida’s African American musicians had found work performing with groups like the Rabbit’s Foot Company. These touring groups and performers helped popularize and share the blues throughout Florida and the American South. The blues gained mainstream popularity after the publication of W.C. Handy’s “Memphis Blues” in 1912. At that time, Florida was already a popular destination for vacations and the state’s population was increasing. The result was a number of blues hits related to Florida, recorded on 78 rpm records and published as sheet music. The titles included “Miami Blues,” “Swanee Blues,” “Jacksonville Blues,” “Miami Beach Blues,” and “Pensacola Blues.”

In the 1930s during the Great Depression, noted folklorists Alan Lomax, Stetson Kennedy and Zora Neale Hurston were commissioned to record blues musicians and other folk artists in Florida. The recordings they made of work songs, “good time” songs, Bahamian blues and even a blues melody by Zora, herself, are an important historical record that demonstrate Florida’s importance in the history and development of the blues. As the touring routes for African American bands known as the “chitlin circuit” developed in the 1930s and 1940s, many of Florida’s nightclubs and dance halls became important stops. These included Pensacola’s Savoy Ballroom, Gainesville’s Cotton Club, Jacksonville’s Two Spot, Tampa’s Apollo Ballroom, Orlando’s South Street Casino, Miami’s Harlem Square and St. Petersburg’s Manhattan Casino.

Blues musicians received widespread attention during the 1960s blues and folk music revival. Beginning in the 1970s, folklorists made a concerted effort to document performances and the wealth of traditional blues talent throughout the state. The Florida Folklife Program recorded blues artists like Moses Williams, Ida Goodson and others. The recordings appeared on the LP Drop on down in Florida, produced by the Florida Folklife Program, Florida Department of State in 1981, which was reissued as a book and CD set in 2012.

Today, the Florida blues scene is bigger and stronger than ever. Blues festivals in the state showcase performers from throughout the state and nation, and there are many classic venues dedicated to presenting jazz and blues.

The Florida’s Got the Blues music tour will guide you in learning about blues history and culture in Florida. Visit the Musicians page to learn about and listen to important blues performers from the Sunshine State, and then use the Things to Do page to visit blues festivals, juke joints, and historic sites to experience the blues music tradition firsthand. 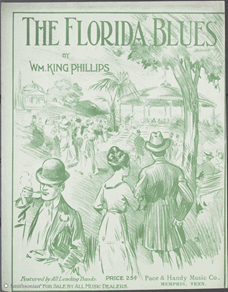 W.C. Handy, called the “Father of the Blues,” asked saxophone player and composer William King Philip of Jacksonville, Florida, to join his band. Together Handy and Philip collaborated on a song called “Florida Blues.” It was published as sheet music and became a hit. “Florida Blues” is still sung today by folk singers and blues bands.

Gospel, which has the same musical roots as the blues, still plays a significant role in the musical life of many Floridians.

The Chitlin Circuit brought blues musicians throughout Florida to places like the Manhattan Casino in St. Petersburg.

The Bradfordville Blues Club in rural Tallahassee is a classic juke joint that has received the Blues' Foundation's Keeping the Blues Alive Award multiple times.

Visit the childhood home of Ray Charles in Greenville, Florida. Charles became a master of various blues-based musics including rhythm and blues, gospel, and soul.

The Ritz Theatre was once a central part of Jacksonville's La Villa community, which was known as the Harlem of the South. Blues entertainers from around the country would visit the Ritz during their stop in La Villa. Today, the Ritz Theatre features various performers and includes a museum of African American history, heritage and culture.

The Alley is an authentic, classic blues joint in Sanford’s historic district that features live music multiple nights a week. Sanford has a rich musical history and was once the home of the blues label King Snake Records.